THE USS ARIZONA MEMORIAL, located in Pearl Harbor in Honolulu, Hawaii, marks the resting place of 1,102 of the 1,177 sailors and marines killed on the USS Arizona (BB-39) during the attack on Pearl Harbor on 7th december 1941 by Japanese imperial forces and commemorates the events of that day. The attack on Pearl Harbor and the island of O’ahu was the action that led to the United States’ direct involvement in World War II.

Built 1962, is visited by more than 1 million people annually. Accessible only by boat, it straddles the sunken hull of the battleship without touching it. Historical information about the attack, shuttle boats to and from the memorial and general visitor services are available at the associated USS Arizona Memorial Visitor Center, which opened in 1980 and is operated by the National Park Service. The sunken remains of the battleship were declared a National Historic Landmark on 5th May 1989.

During and following the end of the World War the Arizona’s wrecked superstructure was removed and efforts began to erect a memorial of the remaining submerged hull. The Pacific War Memorial Commission was created in 1949 to build a permanent memorial somewhere in Hawaii. Admiral Arthur W. Radford, commander of the Pacific Fleet attached a flagpole to the main mast of the Arizonain 1950 and began a tradition of hoisting and lowering the flag. In that same year, a temporary memorial was built above the remaining portion of the deckhouse. Radford requested funds for a national memorial in 1951 and 1952, but was denied because of budget restraints during the Korean War. 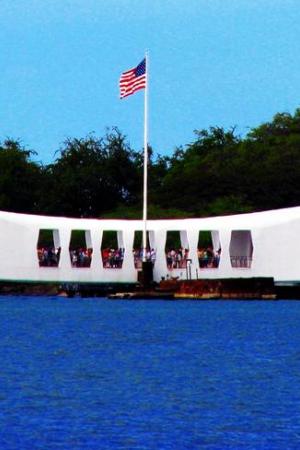 The Navy placed the first permanent memorial, a ten foot tall basalt stone and plaque, over the mid-ship deckhouse on 7th December 1955. President Dwight D. Eisenhower approved the creation of a national memorial in 1958. Enabling legislation required that the memorial, budgeted at US$500,000 be privately financed, however, US$200,000 of the memorial cost was actually government subsidized. During planning stages, the ultimate purpose of the memorial was the subject of competing visions. Some were eager to keep it a tribute to the sailors of the Arizona, while others anticipated a dedication to all the war dead of the Pacific theater. In the end, the legislation authorizing and funding the memorial(HR 44, 1961) declared that the Arizona would be maintained in honour and commemoration of the Armed Forces of the United States who gave their lives to their country during the attack on Pearl Harbor, Hawaii on 7th December 1941.